Downtown Berlin is a bit more attractive now with the opening on Main Street of a pleasant little wine shop, Vonadeau Wine & Spirits. Cheryl Thibodeau is the proprietor and designer of the shop.

Richard Von Schilgen is the contractor. Von Schilgen has renovated the building across the street from the Town Hall which formerly housed Lionel Hills Corner Store and the Cash Market. He and Cheryl were concerned about businesses leaving town, and they wanted to do their part to put things back that the Town used to have. Cheryl has long had an interest in wines, and Loyal Cures liquor store that was across the street has been gone now for at least twenty years. With some encouragement from Von Schilgen, Cheryl purchased part of the building and worked with him to create the shop. It opened on March 31, but Cheryl is planning a Grand Opening for Saturday, April 25, complete with a wine tasting from noon to 3 pm.

Cheryls primary viticultural interest is New York State wines which she would like to promote and perhaps introduce to out of staters. She says she doesnt see a lot of New York State wines in stores in neighboring Massachusetts or Vermont. At the moment she is particularly interested in wines from the Finger Lakes region, but she plans to do more exploring of other New York State regions such as the Hudson River Valley and Long Island. Although about one third of her stock right now is from the Finger Lakes, she also carries wines from California, France, Australia, Chile and New Zealand. A good selection of spirits are also stocked including, rum, gin, vodka, brandy and various varieties of whiskey and liqueurs. Regardless of her own interests though, Cheryl says she will certainly be open to requests from customers.

Is this the best time to open a wine shop, in the midst of an economic collapse? Cheryl and Von Schilgen point to the growing popularity of wine consumption. A recent Time Magazine article also shows that while sales of many commodities have plummeted, certain things are showing a dramatic increase in sales, wine being one of them with sales increasing since January by 8%.

Business, Cheryl says, in the first two weeks has been not bad, given that publicity so far has been just by word of mouth. She is pleased with the new sign out front and her business cards and gift certificates, all designed for her by Natasha Broadwell of Blue Birch Design & Marketing. Local people, she added, have been very encouraging, and Cheryl plans to make her presence known by inviting in different wineries to put on a wine tasting about once a month.

Hours at Vonadeau Wine & Spirits are Tuesday and Friday 4 to 7 pm, Saturday noon to 7 pm and Sunday noon to 4 pm. Call the shop for more information at 658-2450. 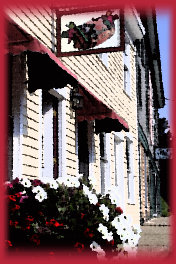